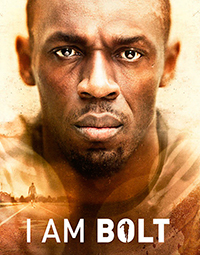 Synopsis
I Am Bolt is a Jamaican film by directors Benjamin Turner and Gabe Turner
This energetic documentary takes an adoring look at Olympic sprinting champion Usain Bolt, “the world’s fastest man,” and his hardcore fans around the world will absolutely adore it. The merely curious may be put off by the film's single-minded focus.  In case there is any doubt in anyone’s mind that Usain Bolt is one of the greatest athletes of the early 21st century, the makers of I Am Bolt hammer home that point again and again.

I Am Bolt - Press Review

That story began around the turn of the century in Bolt’s native Jamaica, when he was in high school and his natural talents as a runner were quickly spotted by professional trainers who groomed him to win the 2002 World Junior Championships—his first top prize—at age 15.